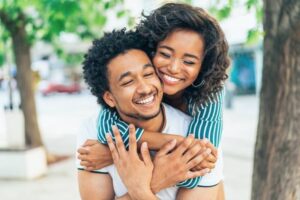 Remember the beginning? The beginning of the journey with the person you decided was who you wanted to spend your life with? The beginning of the journey with the person you wanted to have kids with? The beginning of the journey with the person you literally wanted to talk about….. nothing… with? What a time, you felt alive, right? They call that the honeymoon phase. They call it that because that’s a nice vacation, before the work starts. Before the problems arise and the solutions evade you, that’s the time when you can still feel alive. As a person and as a couple, you’ll never feel more alive than at the discovery of something or someone you know you’ll love the rest of your life. But what happens when you don’t like it as much, or worse, don’t like them as much.. or at all? Is it over forever? Should you find someone else? Is it better to just go be alone to “work on yourself”? Today, how many of these questions are you asking yourself? 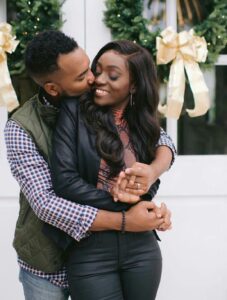 “I wanna enjoy the luxury of like, not knowing each other for real.”
-Wale; “Lotus Flower Bomb”

Like is more important. Like is the motor. It gets you to love, then it carries love the rest of the way. That’s not the popular opinion or “conventional wisdom” but it’s what I’ve observed to be true. I’m also a living testament of it. Time reveals all and eventually it shows you not only what you don’t like about your partner, but what you don’t necessarily like about yourself. As you begin to work on and fix those things, you start to “grow” in a direction that addresses those things. This is the initial glitch in the matrix. Most issues in relationships start with you then they branch out. Hence the term “grow apart”. Let’s dive deeper. 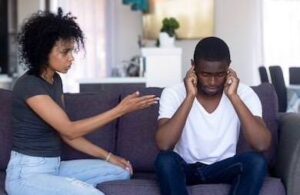 “I know single men that would kill for a home-cooked meal. I know, married men that’ll kill for a quiet house”
– Phonte; “Sending My Love”

A quiet house. It’s not that we don’t want to talk to you, ladies. In fact, most of us do. Most of us can’t. At least not about what we want to talk about. You’re probably tired of the soapbox already and that’s just in 3 sentences. We’ve grown so tired of accountability, as people, that we’ve grown even quicker tired of each other’s gripes. No woman wants a complaining man, no man wants to be labeled a complaining man, but everybody wants their needs addressed. Seems like, unless we all become mind readers, we won’t get anywhere unless we’re willing to deal with and do the things we don’t want to do. At least in moderation, LOVE is supposed to buy your partner that courtesy. Love starts to fall deeper and deeper in the background when you realize you don’t like the way your partner uses your neglected needs against you or how they disregard them completely. The same goes for how we disregard the interests and hobbies of our partners that we don’t share or don’t serve us. A hardworking man’s need, especially a black man in America, for peace is second to none. Being able to enjoy things without the burden of responsibility to everyone else, that he normally has, is essential. Let me paint a quick picture. Women are never expected to provide for other adults. Ever. In fact, even a woman financially able to, is looked at as insane if she ever considers it. Providing for her kids, if she’s single, is somewhat expected but it’s more respected when it happens because it’s in spite of a man not helping her. However, those kids aren’t adults. A hardworking man, that provides, is normally expected to pay majority of the bills for the house that another adult lives in, and possibly kids. He’s expected to pay for the dates and majority of, if not all, the trips they take as couple and the ones as a family. He has to figure out how to do this while also having to manage how much time he puts into making those luxuries possible. He’s expected to somehow make enough money, in a quick enough time, then turn around and give his woman and kids enough initiative and attention to make them feel loved. When he excels at the providing and isn’t finding enough time or attention, alarms ring off. “You don’t talk to me enough”, “We don’t do things together enough”, “We don’t take trips enough”, “You rarely tell me I’m beautiful or how much I mean to you”, “I’m always the one helping the kids”, “I get tired too…”… these are the complaints that, whether they’re said once or 50 times, make the house the noisiest. He probably feels like he’s doing everything he can as much as he can, because he loves his family, but it’s not being appreciated. She feels like “you find time for your friends”, “you talk to everybody else”, “you can tweet, why you can’t text”, “you play that game for hours and don’t be worried about me.” What she’s missing is all of those things “he can do” are the few times, psychologically, that he gets to do things FOR HIMSELF. Things that don’t require being responsible for everybody else, and in that, no one can make him feel like unappreciated. The need for appreciation is real. It’s real easy to then fall into the habit of “Man I do xyz for her, she never worry about bills, I send the money for the nails, I spent this on her birthday”. Once that quiet house is ruined, his tunnel vision normally leads to the actions that are the root of her complaints. Lastly, once you start counting your good contributions, you can’t see where those tangible needs are blinding you from the emotional and mental needs. 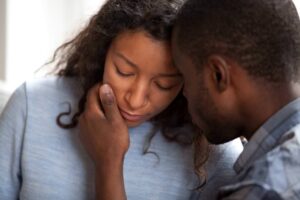 Stimulate my mind. Love languages aside, we have natural happiness languages that differ as men and women. I don’t personally know a woman that doesn’t need her partner to stimulate her mind first. I also don’t know many men that don’t need a peaceful place once they leave the pressures of the world. Sure we both need these things, I just think where they line up on the priority ladder for each other. What I’ve noticed is, even men and women capable of providing the highest priority for their partner, neglects it when they feel their priority is being neglected by the other side. It becomes blame game central. Before you know it, the effort subsides and the wedge “grows” further “apart”. I live by the phrase, “Men lead”; not to be confused with men dominate. When a man isn’t stimulating a woman’s mind with great care first, protection second, and ideas third… her mind can wander even beyond her reach. Ultimately, that’s on the man, in my opinion. When a man makes consistent efforts toward the mind of his woman, her “excitement” grows for everything, including listening. There’s a joke there that I won’t wear out but this is what understanding really is. As men we can’t want to be the leader or the boss if we don’t want the responsibility that comes with a poorly steered ship. Michael Jordan is the greatest basketball player of all time, at no point did his coach Phil Jackson say, “great, I’ve built the team, we have great facilities, the lights are on, I can not give guidance, encouragement, and alternative inspirational things to Mike. I can just come in and not say anything anymore during practice. I don’t even have to talk to him during the day or during the timeouts”. When this mental reinforcement lacks, that’s the intimacy lack that leads to everything else. Intimacy is a tricky thing that most men confuse for affection. Affection is physical, intimacy is emotional. It’s vulnerability. It’s consideration. It’s communication without force. It fuels the motivation for emotional acts and physical prowess. It’s what’s going to keep your woman wanting to jump your bones when she sees you naked in the bathroom and fully clothed at the family bbq or church parking lot talking to people. Intimacy is the chain that links like and love and turns it into passion for women. That starts with her mind and what she feels like you understand about her and what you let her in enough to understand about you. Consistently. 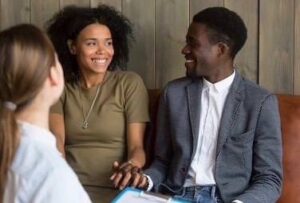 “Baby you touch every part of me”
-Monica; “Love All Over Me”

Decisions have to be made. Throughout the process of breaking all of this down, giving out these hypotheticals, what I think never wavers, is the love. How can that be? How can you get to such a point of dislike that your partner’s voice annoys you, how they eat annoys you, how they do things they’ve always done annoys you to extreme levels now, and you still love them the same? Because… love is the anchor. In the midst of all those things, love has kept you there. If said issues go on for too long or become unbearable, at some point, decisions definitely have to be made. But if the decision is to part ways, that doesn’t change the love for me. Love isn’t enough. It’s something that’s said to reassure but not necessarily best for refocusing. I’m telling you that love and “want to” aren’t enough. That’s the cold hard truth and I’m telling you that so you can refocus. Even if you’re currently single, you need to refocus so you can see the cliff before you get to it. You can learn to re-like your partner. You can fix issues that seem beyond reproach if you haven’t removed your anchor. A lot of times, that takes an unbiased third party because that loud house becomes so loud that no one is listening to each other. That mediator is there to listen to both and translate become you’re more times than not speaking different love languages at this point. Learning the woman or man your partner has become doesn’t mean the parts of them you like so much aren’t still there, those parts have matured. Some of those parts have even been neglected by both of you, within yourselves and with your partner. Life gets in the way. Your girlfriends routine has become so busy, she may have forgot how much she liked walking in the park and that’s where y’all had the best talks. She may have forgotten how much she enjoyed painting. Your boyfriend may have forgot or not had time to go to the gym to play basketball or how much he enjoyed weekend trips back to see his friends. Partnership at its purest isn’t about reminding you what you don’t do for me, it’s about reminding you what you don’t do for you. Operating from that place, mutually, opens a level of care taking that is unmatched. A level that can’t be not liked! Find the like and you’ll  find the legs to your relationship. If you just depend on the love, you’ll be deep in the water before you know it.