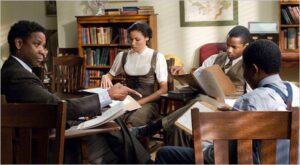 There’s a torturous history here. Here, is the cloud over where Black America places traditional education on its list of priorities. Our deepest and most profound history is based on slaves being killed for the attempt to educate others or educate themselves. Literally being killed for being able to read or for stealing books. That led to the segregation of schools post-slavery and during Jim Crow. Which materialized later into systematically oppressing the quality of schools in predominantly black districts by keeping them overcrowded and underfunded. In the most immediate history, we’ve discredited the importance of it OURSELVES. We’ve started to condition our peers, and subsequently our kids, that college isn’t needed. The domino effect of that is when you discredit the importance of higher education, you discredit the importance of primary education, unconsciously. Meanwhile, millionaires are paying millions in bribes and catching federal cases to get their kids, who will inherit millions, into college. 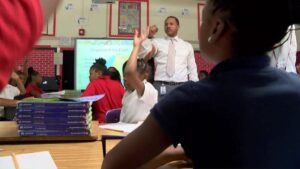 “‘Cause who the kids gone listen to, huh?”
– Kanye West

I was speaking with a friend, who told me about a conversation with a mutual friend who’s also a teacher, about the standards today in the hometown school system we grew up in. The biggest takeaway and teachers know this, was the number of students (more than 80%) that will be passed on to the next grade, that isn’t REALLY passing their current grade. The lazy response to this would be to put the blame on the teachers or to JUST put the blame on the system, when really… the blame is on all of us. We’ve heard of “trickle-down economics”, but this is “trickle-down messaging”.  We have to be aware of how we talk about education around our kids, how involved we are daily / weekly with our kids’ education, and how involved and knowledgeable we are about their curriculum, career goals, and how to guide them from point A to point B. If you tell your daughter she’s beautiful every day, more often than not, she’ll grow up to be confident in her looks. If you tell your son he’s the best player on his team every day, more times than not, he’ll grow up to believe it (even if it’s not true). If you tell your son “he’s not going to be sh*t just like his daddy”, more times than not, he’ll grow up to believe it. If you tell your daughter that nobody is ever going to love her or treat her right, more times than not, she’ll grow up believing that and looking for love in the wrong places or not at all. So when we tell our kids that they don’t need college, what do you think they grow up to believe about education? If you show up to their games but don’t show up to Open House and Parent-Teacher Conferences, what are you telling them? If you won’t show up to the city and state-organized meetings where they are discussing how much funding will be allocated for programs for your school district and where it will be deployed, what are you telling both the school board and your kids? We have to take a hard hard look at our direct and indirect messaging as it pertains to everything but specifically, in this case, to education. 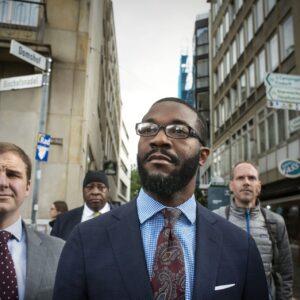 “It’s true, how society don’t want me to move, into the penthouse building with spectacular views”
– Jay-Z

The Smart Money’s on hold. Can you be successful without college? Yes. Can you find specific ways to teach yourself certain industries or functions in business online? YES. So why do you need college? And furthermore, why don’t they teach these financial classes in high school? Simple answer: Privileged information. This information is reserved for people smart enough, savvy enough, and privileged enough to go and get it. Privileged information then in turn gives you access to privileged networks. College gives you both. You can be an exceptional talent, you’ll still need a team. You’ll still need outside resources. You’ll still need MORE information. This is why those millionaires are paying for their kids to get IN college. They are paying for their kids to be in one place for four years with the next leaders in science, tech, business, and law for their generation. That’s impeccable access that WE haven’t completely tapped into the value of when we speak of how much “college isn’t needed”. Although we will say “It’s not what you know, it’s who you know” so casually, not realizing that the WHO you know is incredibly more lucrative if they came from exceptional schools where they performed and networked exceptionally and are now in the corporate world, being exceptional. Student loans are normally the next complaint, but it’s two things about that: It’s your how and why. First, if you go to an in-state school, finish in the standard 4-5 years, and you ONLY take out the loans you NEED then that may put you anywhere from around 50 – 75K in student loan debt. That’s your WHY. It sounds like a lot, and it is, but most of the people who I talk to about student loan debt also covet Benzes and BMW’s that cost around the same amount, that won’t make you a dollar. Debt is debt, a student loan has to be paid off just like a car loan EXCEPT car loans have to be paid back much sooner or they can take your car. Your HOW is, what are you going to school for. If you’re getting 60k in debt to go take a job of passion that averages around 40k per year in annual salary, then you need to do it differently. Maybe you need to do those first two years in community college and finish at a university to lower cost but ultimately get to the same endpoint. Or maybe, you could be adamant in encouraging your kids, and yourself too if you’re a student, to meet the standards required for scholarships. Growing up in Georgia, I know HOPE Scholarship will pay around 80% of my son’s college tuition if he graduates high school with a 3.0 GPA. I know the Zell Miller Scholarship will pay for 100% of it if my son graduates high school with a 3.7 GPA. Is that going to be hard for him? YES. But so will his sports training and practice, so will his household chores, and so will him building a business ( since that’s the cliche alternative to college now) that scales. If my degree is going to cost me 60k, but I’ll gross 120k annually for the next 15-20 years, then it’s a very smart investment. It also has a way better R.O.I. (Return on Investment) than the Benz that I’m actually going to buy out of that 120k salary.

“Passion is energy. Feel the power that comes from focusing on what excites you.”
– Oprah Winfrey

What is success? Hard isn’t avoidable when success is the destination. I won’t allow my son to be passed through life only to get to the age of adulthood not being properly taught or challenged. I won’t give him the excuses that no one will care about when it’s time for him to be productive. I won’t allow the rhetoric in his most formidable years to condition him to not see the benefit in higher education or education at all.  I won’t force him into college but he will be given high expectations and high training and given high amounts of attention up until that point that if he decides not to go to college he will have made an informed decision and will need to show me a better plan for his life. What’s his barometer for success? If he wants a lawn care business that brings in 70k after expenses and wants to be home by 5 pm every night with his family, he will need a different type of education. Could he benefit from going to learn business management in college? Yes. But it wouldn’t be as needed. He could learn that from me first hand because I have run a couple of businesses. However, if his barometer of success is to gross 250k in Corporate America, run fortune 500 (or 100) companies, and get into stocks and creative investments, he absolutely should go to college. Because at the very least, a Bachelor’s Degree is a barrier to entry. What that means is, he could be a great worker, knowledgeable and exceptional in his field but without a degree, he’s more likely to have a ceiling. He could start from the entry-level position, climb his way up through hard work and networking, reach 100k even, and then he’ll be held out of contention for executive positions (In most companies) because he doesn’t have a degree. Is he a failure if he never goes any higher? No. Is it a bad life to make 100k and not be an executive? No. But it’s not the life he wanted in full so by it not being what he was shooting for, I failed him by not insuring he understood the role college would play in it.

The system has failed our kids but it hasn’t failed its architects; it works how it’s designed. Teachers have failed our kids but it has been mostly by no design of their own. WE have failed our kids by not being present enough to see the war on their education being fought without us. That war leaves them in a state of P.T.S.D. because of the lack of mental resources, now they’ve spilled over into community warfare and substance abuse. It all starts with what is put into the mind. That’s why they killed slaves for TRYING to read and learn. It’s easier to manipulate the emotions of a person who does not have the intellect to know better ways of processing and adjusting. It’s easier to keep you in tax brackets that will limit how much money you have to live and then leave to your family for the next few generations. This is about long game. This isn’t just about do you have enough for a nice house and a nice car. This just isn’t just about can you read and write. This isn’t just about if you can find other avenues to “get by”. Generational wealth has become a trendy topic of conversation, and it’s needed, but that doesn’t happen without proper education and necessary credentials. No amount of panels or youtube videos can replace the built in information, network, and necessary disciplines to operate in a system that is built around education. Sitting out of the game will never win it. The best way is to learn the game, learn the way to do it better, then teach your team. College is a film session in preparation for game day.