I never wanted this for you. I cry more for you than I do for myself.

I don’t know when this pain stops. It’s a pain I would assume most fathers in my position feel, I know there are exceptions but this isn’t about them. My son is 8 years old and quickly approaching 9 and it still hurts when I have to take him home. For so many reasons. I remember being 9 years old playing NBA Live 98 with my dad. I remember this night so vividly. It was after Kobe Bryant’s first All-Star Game and what most thought would be Michael Jordan’s last All-Star Game. It was a February night and my dad came to our single-wide trailer to watch the game with me after getting off from work. Even as a 9-year-old, I was smart enough to realize how tired my dad was. He actually fell asleep watching the game. By the time the game went off, I quickly turned on Live 98. Almost hoping to trick my dad into believing that the All-Star Game was still on so if he woke up for a second he wouldn’t think it was time to leave yet. Once he realized it was over, after 10 pm, and that I had to go to school he began to get ready to leave. I begged him to play one-quarter of Live with me, which he was terrible at. He must’ve known how bad I didn’t want him to leave because he still played. After that quarter he left and I cried. Just for clarity, I saw my dad every week a few times per week. It wasn’t a case where I had to wait until the weekend, or every other weekend, or didn’t know when the next time would be. For the most part, I could see my dad whenever I wanted to, but it just wasn’t the same. My dad lived with us for a week that year. I want to say there was some minor fire damage at his house and my mom allowed him to crash at our house that week and he slept in my bottom bunk. All it took was that week for me to never want him to leave. This was the first time, in years that it meant something to me, that I had both of my parents under the same roof. They divorced early in my childhood. 20 years later, I still remember laying in my bed vowing that I would never not live in the house with my kids. I never wanted my son to feel what I felt. Since my son was 2 years old, he had to deal with that.

My son’s mom never keeps me away from him. I’ve traveled bi-weekly, at least, to see him since he was still in diapers and we didn’t live in the same state anymore. When I lived in Baltimore, he was in Albany, Ga, I drove down every two weeks. When I was in Raleigh, NC, I drove every two weeks. Then finally we got in the same city and I would get him Friday to Monday or Tuesday 3 weeks per month. Then I started getting him for the whole summer the last few summers. All of those trips, all of those drop-offs and pick-ups, 95% of those drop-offs ended with me crying my eyes out. I’ve always noticed how he struggles with which parent he has to let down when he has a choice of which one he’s going to go with or spend the night with. I’ve seen him do those same tricks I did to try to get my dad to stay later whenever he knows I’m about to leave him. I’ve dealt with the thought of knowing that I’m going to miss something about his day simply because I’m going back out of town to work and he’ll be in another city or state with his mom. That’s always tough for me to deal with. When he was 5 years old, it was the first time he asked me directly, “Daddy why do you have to go somewhere else to stay? Why Mama doesn’t let you stay here?”. It was actually relieving that I could finally have a convo with him to let him know it wasn’t his fault and that I would always be there for him and his mom. But I still had to go drop him off. What if he had more questions? I’m sure he did. 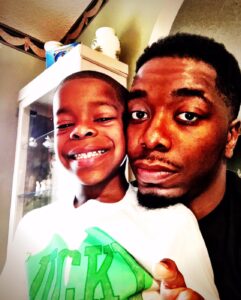 Now it has been 3 years since then and the tears still flow sincerely. About three weeks ago I had to take him back home to Albany for his school year to start and it’s actually getting harder. It’s been such a learning experience and is what I credit for most of my growth. Never having much “baby mama drama” outside of just regular disagreements or petty arguments, most people might not believe how tough just not being under the same roof with him is. Not being there when he gets home from school, not being able to regularly take him either. Having to ask about his day on FaceTime, even though I’m thankful for technology, is extremely hard. That led me to look for information. It also helped me understand how detrimental it is for us, as black men, to have kids with women before we marry them. I became obsessed with understanding the conditioning that makes it so common now for black kids to be from broken homes. When I really realized how damning it is, my 8 years old told me he was going to have kids one day but not get married. “Why do I have to get married? You and mama didn’t get married but y’all still love me.” If that thought process was that of an 8-year-old, what does that say about 21 years old me who thought the same way. These are generational curses that have to be broken through action and information. I don’t wish these teary-eyed car rides on anybody. I don’t wish that decision of picking between your parents on any child. I don’t know when the tears will stop, I just know it hasn’t gotten any easier. 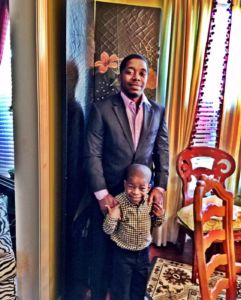 That’s about way more than money. This is the part that they don’t talk about. When judges are assigning child support amounts and people online are debating the fairness or the concept of it, who thinks about this part? The fact that fathers have to deal with these feelings. Mothers automatically inherit physical custody. Not that I am against that but the reality is that nobody considers the effect it has on an active father. The reducing of the black father specifically to what he can afford to pay instead of the importance of his presence. The trickle-down economics of this leads to the division between our men and women that the child support system has been weaponized to contribute to. Fathers… I’ll say that again… FATHERS don’t mind doing everything needed for their kids any more than moms do. It’s just the message it sends to the collective that somebody else determines how much of you {Time & Salary} is necessary for your child. I’m thankful that I and my son’s mom have always been able to come to a mutual agreement on the amount of money I send her monthly but I’ve even offered to send that if my son was to come to stay with me. I understand why until now she hasn’t been willing to let him come… because I cry every time he leaves.

On my next blog, “I Wish Women Understood Their Power” I’ll talk more about how much we need women, as men, as fathers, and as sons.