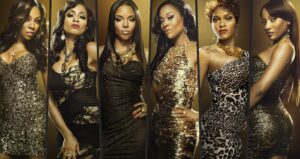 Fellas, you ever been enjoying your day, then your girl comes home on the phone with the most aggression you’ve heard all day. You peep the tone in her phone before you ever hear her say “Ashley so stupid. Her baby daddy is in everybody inbox anyway”. She goes into the other room so you think you’ve dodged the madness. You’ll kiss her later. She comes back in the room “That’s why I don’t like going out with her. She really be pressed trying to be in so and so face like nobody doesn’t see her”

This is all fiction of course. But I’m sure it sounds somewhat familiar. You know at some point you’ll have to sit through at least half of the story about this and act as you care. You’ll have to do your best to be supportive without crossing into the line of fire because you spotted a small almost invisible somewhat insignificant minor not even worth mentioning part of the story that might’ve been her fault. If you do make such a fatal mistake in recognizing her wrong in it, by all means, back… away.. from.. the.. truth. You and I both know; your girlfriend and Ashley go through this a couple of times per month. Or Ashley has the problem with Jasmine and your girl is egging her on. No matter the case, they’ll all be on Instagram before you know it, smiling, and acting like none of them despises any of the rest of them. She’ll be mad at you for saying she was wrong, longer than she was mad about whatever happened.

I say all this to say…. Why can’t women stay friends?

Some beautiful woman reading this immediately just said to herself, “I don’t know what he talking about. I and all my girls love each other and we out here inspiring each other and reaching goals and saving money and not worried about none of these n****s and we are always good. Super good”. (I speak fluent ratchet; judge your mother)

But the truth is, women really struggle to maintain friendships over time, especially in groups, and especially if said women are attractive. That’s one of the roots of the problem if you ask me (a black man that doesn’t know anything about being a woman whatsoever). You’ll commonly hear amongst women the “I don’t really get along with too many girls. I’m normally friends with more men and I’m just the cool homegirl” notion or some variation of that. The more I heard this, the more my brain worked out the math problem in the background. It kind of works like the FBI agent in all of our phones reporting back to the government our every move and desire.

I have a lot of platonic female friends. Very attractive ones and some that are…. Good beautiful spirits and whatnot. I’m a conversationalist also; I love to know “why”. The benefit of keeping my pants up at all times around my female friends is we get to talk about things that don’t have any other motives to them. It gives me great insight just to listen to them talk about everyday things and also when they’re having an issue. Some of my most loving caring and giving female friends have the same problems with sustaining female friend groups like the ones that someone might say are “full of themselves”. So, if that’s not the issue, what is? Truth be told, every woman in this world has a certain sense of entitlement. I’m not saying men don’t, men just aren’t the topic right now. Men do contribute to why women have this struggle though. From what I’ve noticed over and over again is that society teaches men, and subsequently women, that men should cater to the feelings, desires, and attitudes of women to ultimately resolve whatever the issue is. Even when a woman is in the wrong, as a man, we’re kind of conditioned that being a good man means you still go and fix it. Women, no matter how much they disagree or state that these men are a dying breed, get used to this. ESPECIALLY an attractive woman. An attractive woman goes through this country of ours predominantly on a pedestal. If she wants money spent on her, most men will do it. If she feels hurt or saddened by something, most men will comfort her. If she’s being unreasonable but sticks to her guns, most men will “take the L”. These are real facts. In most cases, women are treated as the privileged, and that privilege is shown when they’re right or wrong, a good man will “be the man” and abandon reason for comfort. Now when you’ve been conditioned that you, as a woman, are somewhat entitled to this treatment, perspective gets blurred. Remove men from this equation and put a bunch of women together, all of which are predominantly used to being catered to, and you’ll get a bunch of problems growing because most of those women are waiting on someone to “take the L”. That’s foreign territory for them. While playing the waiting game, they search for reinforcement. They’ll talk to the other friends in the circle to try to justify them being the one whose ring gets kissed, which works like poison throughout the group. Every problem is becoming a mountain and all the parties involved are too pretty to climb them.

Women normally get to use qualifiers to absolve themselves of accountability in conflict like, “But you’re the man” “well I’m a woman, you know I’m emotional” or “you know it’s that time…” that have a better conviction rate than the Federal Government. They’re so beautiful and compassionate and intelligent that most of the time it’s emotionally cheaper to keep them happy. “Happy Wife, Happy life”, probably one of my top 2 most hated clichés ever and it’s not #2, just further confirms the mentality. I’ll fight that fight later.

There’s also a quiet competitive factor. I know I know, all women are confident and secure and all of that, but women are harder on women than any man could be, judgment-wise. Simply because… well we don’t know what the right blend of makeup is. We don’t know when the weave is perfect or not. We don’t know when the PH… ok, we know that but my point is, we aren’t as detail-oriented. “What does he see in HER?” or “What are we doing the wrong girl? SHE got HIM?” are common to hear when you’re listening to women half-jokingly slander the imperfections of other women. We as a society put so much pressure on women to look a certain way, get married by a certain time, get and keep the attention of a certain (alleged) caliber of man, and get said man to go above and beyond the status quo that, sadly, women start using each other as measuring sticks. I know this never happens and I’m imagining all of it, but in my dreams, the unspoken competition with each other combined with the entitlement ruins a lot of great friendships amongst women.

The last major factor to me is that, ultimately, there’s nothing women trust less than men… except other women. It’s like that Spiderman meme of Spiderman pointing at Spiderman, they know exactly what they’re looking at. They know all the tricks. One of the reasons your girlfriend just doesn’t like your good (platonic) female friend but she can’t give you a real reason now. She knows, black men don’t cheat, but she has a FEELING about your PLATONIC female friend. She picks up on her intentions by the way she blinks her eyes or her breathing pattern, and even the way she says “Hey girl!!”. Women don’t really trust women much because they know the power they share. The power they yield over men to get us to “take the L”. Wrap all of these up in one and that’s not a vegan meal.

It’s laughable to me when I’m not at the crossroads of it, but I really believe that this is the underlying root of so many inconsistent female friendships. Am I saying that all women have these problems being friends? NO. Am I saying that other factors, such as some people just aren’t good friends, couldn’t be a big part of it? No. All I’m saying is “(SOME) Girls just can’t be friends”—- because they are used to getting THEIR way. We could expand that to why women can’t be friends with men they like but that’s an argument for another blog post.