Posted at 11:00 AM in Relationship by Travis 2 Comments

“A doomed fate, living with who you’d soon hate. Ex-life partners trying to co-exist as roommates.”

What does love owe us? What do the people we love, owe us? Why do we put people we love thru so much? What I’ve observed recently is, the most poisonous thing in love, and in a relationship, is entitlement. We’re all guilty of it. We get involved with people and our hope covers our scars in the beginning; that’s the Honeymoon Phase. Unlike the actual honeymoon, it normally takes a week for the vacation to be over, but eventually, it comes. That’s when the work starts, and even more so when the expectations start.  Expectations have become taboo in pop culture but I think they are needed. The absence of expectations will not lead to the absence of disappointment. The reason being, it’s impossible to not have expectations. Human nature automatically develops expectations for everything in our lives. Of course, we have to manage expectations and focus on what’s realistic and what’s fair, but I don’t want a woman that doesn’t expect things from me. I’m going to always have expectations of anyone I consistently give time to. However, with expectations, comes mutual accountability.

Is there a such thing as too much reassurance?

In the generation of healing, the most common unrealistic expectation is that people go into relationships expecting the new partner to help them heal from the pain of their past. Directly and indirectly. When it’s direct, it’s communicated, and it at least gives the potential new partner the chance to run. Indirectly, we expect our partners to overcompensate for our voids. Sometimes that overcompensation comes in the form of money spent, time spent, reassurance required, and/or toxic behavior excused.

In relationships that most commonly become exhausting, there’s always The Needer and The Appeaser. Dominant and submissive energy are both beneficial until the abuse of the dominant energy begins. This doesn’t have to be physical acts, dominant energy is felt in all ways. Are you the one in your relationship always trying to keep the peace? Are you the one who always goes above and beyond to get things done for your partner without gratitude ever being shown? Are you constantly trying to do everything perfectly so you won’t “have to hear their mouth”? It’s all exhausting. 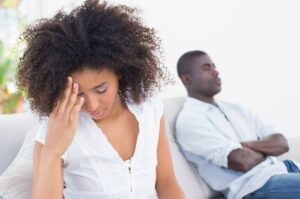 When you exhaust your partner the frustration blinds them so much that they can’t see you clearly anymore. Their frustration becomes so thick that it stops them from even seeing the best parts of you. It’s a domino effect that leads to them being a version of themselves that leads to your exhaustion and your frustration. The only way to grow apart is if frustration is in the middle of a couple. When the frustration isn’t there, you can both grow in your own individual rights but you will constantly and continuously invite each other into the new chapters of your journey. To exhaust your partner doesn’t mean you don’t love them, it’s just sometimes we get caught up in ourselves and our own bad habits. Not to mention, it’s hard to hold people you love accountable because you care as much about their response to their critique as you care about your own happiness. Over time your happiness becomes a group project. It’s really hard to be happy personally when your partner is unhappy, so don’t feel bad about the consideration. But like everything else, even too much consideration is a liability. Learning to communicate when your partner’s habits have become exhausting and abusive is important. If it’s real love there, you can communicate and have discourse, with love.