Posted at 11:00 AM in Culture, Empowerment by Travis 0 Comments 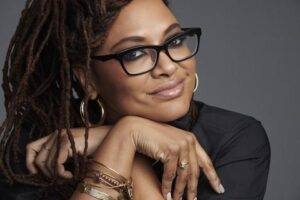 “If your dream only includes you, it’s too small”
– Ava Duvernay

I’ve been wanting to start this #BlackWomenInspire series for some time; life gets in the way sometimes. Fittingly, Ava Duvernay “didn’t pick up a camera until I was 32”.

In case you’ve been under a rock, Ms. Ava Duvernay is a film director, producer, screenwriter, and former journalist. I first came across her work with her documentary, The 13th, a documentary about how mass incarceration amongst black and brown people is the redistribution of slavery. A very thorough account of how the United States through legislation and social engineer has attacked poor black and brown communities. A chilling recollection of events and practices that are almost hiding in plain sight, but Ava’s scope of things painted a perfect picture of what has been going on and what is still going on. It’s not often that I watch something and I’m equally as interested in who framed the piece as I am about the content of the piece but this was a different level of art through struggle. I was inspired. I’m still inspired. Ms. Duvernay appeared in the documentary also which gave me a name, face, and energy to attach to that inspiration. Almost as a package with the release of the documentary on Netflix, was an accompanying interview where Oprah discusses the opus with Ava, which gave more insight into who she was and what her vision was.

It was after this that I began to look more into her story and to my pleasant surprise I learned that she also directed Selma, a movie about the dynamic between Dr. Martin Luther King, Jr, and President Lyndon B. Johnson prior to, during, and after the 1965 Selma to Montgomery march. A beautifully depicted, painful story, that further showed me a piece of her heart. A heart filled with telling the stories of the black experience. I would read that she created Queen Sugar, an ESPN documentary on Venus Williams called Venus Vs., another documentary on the Essence Festival called Live from the Essence Music Festival, most recently the movie A Wrinkle In Time & Jay-Z’s “Family Feud” music mini short video, amongst many more.

What resonated with me the most was that a black woman from Compton, California was doing such great impactful work, seemingly in the shadows for the most part. Up until recently, anyway. She recently became the first black woman to direct a live-action film with over a $100 million dollar budget for A Wrinkle In Time which has garnered more publicity, finally. This inspiration was twofold for me. I found solace in the era of “look at me” that someone, I’m sure there are others, was just doing the work. Doing it with great execution at that. That inspired me to no end because if I had to choose a path it would be similar to hers. In a perfect world, I’d be able to share my art with the world, connect in an organic way, and not be about celebrity nearly as much as it is about integrity and passion. Her “late” start as a director, after starting her career in journalism, gives the reassurance that as long as we’re here, there’s no time or age limit on when you can change your course to greatness. The second fold was somewhat disheartening. Disheartening from the aspect of, why didn’t I know about her sooner? Why doesn’t more of my friends, older and younger, male and female, know about her? A luminary of our time, it’s so important that we understand there are more lanes for us. Outside of that, all of her content that I’ve watched, struck me with such conviction that others may be missing out on.

She’s the original inspiration for this entire idea of #BlackWomenInspire so, Thank you, Ms. Ava Duvernay, for your light. For the energy, you exude through speech and radiance in the interviews I’ve seen. Also, for works that humanize and unify us as a community.